There is a yellowed 1984 edition of the Grosse Pointe News that is among JT Harding’s most prized possessions. On the front page of this Nov. 22 newspaper, Harding and his Dirty Trixx bandmates — John Lowery, Rich Waller, Steve Mellos and Steve Gibbs — pose with attitude as the reigning Battle of the Bands champions.

The front-page photo was just the first step in a successful career in the music industry for Harding, who grew up in Grosse Pointe Park with her adoptive parents, Larry and Kendra Harding. He shares his story – from the fond memories of his youth to his eventual songwriting success – in his new memoir, “Party Like a Rockstar: The Crazy, Coincidental, Hard-Luck and Harmonious Life of a Songwriter.”

“I grew up in Grosse Pointe, my childhood and teenage years were absolutely magical,” Harding said. “I was haunted by dreams of rock stardom.”

In the book, he recounts his days at Defer Elementary School, as well as Pierce Middle School and Grosse Pointe South High School, and the people he shared them with.

“I’m still friends with the same people I knew then,” he said.

Harding looks back on his life with an unparalleled sense of humor and a gift for remembrance. His pop culture references will likely resonate with any child of the 1970s and while he approaches much of his youth with wit, he also honestly addresses the tragedies he experienced, including the death of his oldest brother.

“My heart was more broken than McDonald’s ice cream machine,” he said. “There are twists and colorful characters. It’s like a movie, but you just don’t know the plot.

After leaving Grosse Pointe, Harding spent time in Los Angeles before moving to Nashville, where he currently lives.

“I made my first demo tape with the money I made on ‘Rock & Roll Jeopardy!

“When I moved to Los Angeles, I worked at a record store, Tower Records. I got the job there so I could meet famous people. And I did. I met Michael Jackson, Prince, Sylvester Stallone, Bruce Springsteen, I gave every one of them my demo. 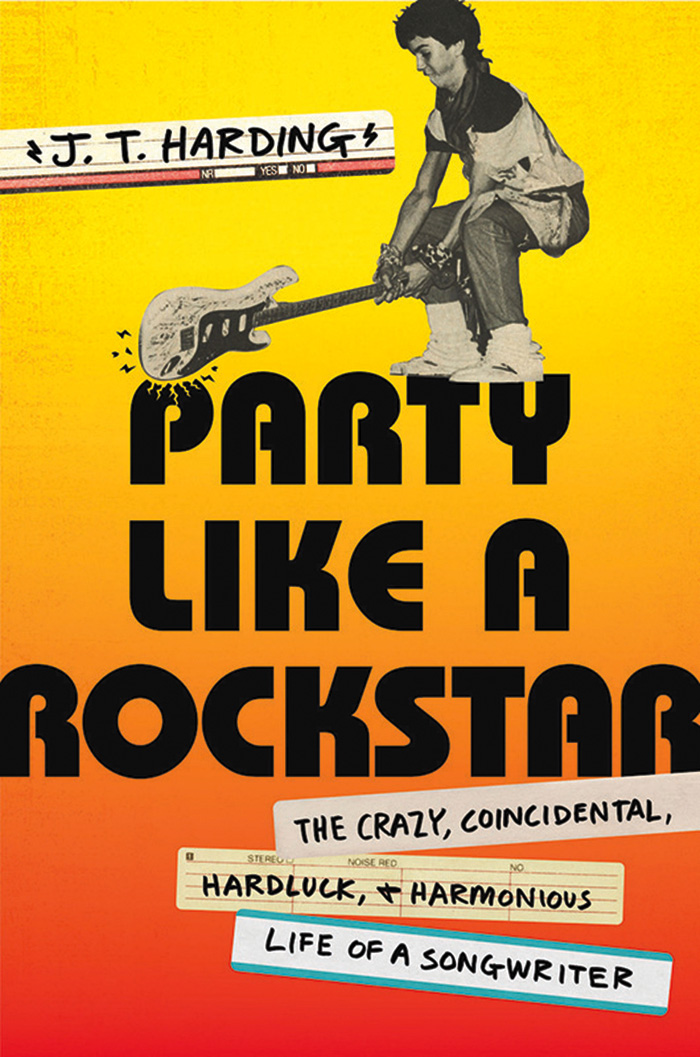 Courtesy picture
“Party Like a Rockstar” is available wherever the books are sold.

“When I write songs, I load them with details about my personal life,” he said. “Country has to be very authentic. As long as I’m honest about what I write, it will work.

This honest writing helped him pen the hit “Sangria” for Blake Shelton and “Bar at the End of the World” for Kenny Chesney, to name just two.

“It doesn’t even look like work,” he said. “Rehearsing the band and writing songs has never felt like work. That’s why it’s called playing music.

However, he noted with a smirk: “Songs are like sausages: don’t watch them being made; just enjoy them when they are ready.

Despite his history of big-name writing partners, Harding admits he still feels impressed — like during a recent songwriting session with Jon Bon Jovi. He said it’s a surreal feeling, “When you’ve heard someone on the radio for years and years, then you’re sitting next to them writing a song.

Harding’s love for his hometown is evident throughout his memoir, as Grosse Pointe is a prominent feature of the book.

“I couldn’t have been a successful songwriter if I wasn’t from Michigan and watching everyone work hard,” he said. “I am adopted. I could have ended up anywhere.

With a cabin in northern Michigan, Harding often returns to Mitten State and makes it a point to visit Grosse Pointe.

“I love Grosse Pointe,” he said. “I love sitting in the Starbucks, I love driving Lakeshore. It’s something magical that I can always come back to. I’ve been riding listening to music since I was 16. Only now when I drive, I could hear my own song.

Harding said he hopes his memoir will help inspire readers.

“It’s the book I wish I had when I got into the music business,” he said. “This book is for anyone who’s ever had some kind of dream they wanted to pursue but didn’t know how to get there,” he said, “because I can relate to that feeling and all the ups and downs low it takes to arrange for that to happen.

“If anybody’s in a band or writing songs or wants to get on ‘The Voice,’ you can definitely do that,” he added. “Someone is going to be No. 1 in the charts by the end of time. It might as well be you. I get that, so I think anyone can do it.

“Party Like a Rockstar” is available wherever the books are sold and online.

Harding will discuss his memoir during an 8 p.m. performance on Saturday, March 5 at Cadieux Café, 4300 Cadieux, Detroit. Admission is $30 and includes a copy of her book.